Start a Wiki
watch 01:48
The Loop (Movies)
Do you like this video?
A Bug's Life is a Pixar movie which tells about small cars that are fighting versus some "bullies", some cars which wanna kill the small cars (the bugs). A scene of the movie appears at the end of Cars. In this scene, Flik (the protagonist) doesn't believe that the cars which are in front of him are circus cars.

The movie also appears in a poster in Paris, in Cars 2. 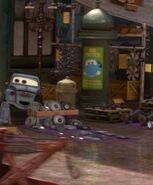 A Bug's Life in Paris, where it is named 1001 Pattes
Add a photo to this gallery
Retrieved from "https://worldofcarsdrivein.fandom.com/wiki/A_Bug%27s_Life?oldid=152743"
Community content is available under CC-BY-SA unless otherwise noted.