Aaron Clocker is a Next-Generation race car that competes in the Piston Cup Racing Series with the number 48 for the Re-Volting team. He joined the team in 2016, replacing T.G. Castlenut.

In Cars 3, Aaron Clocker entered the Piston Cup Racing Series during the mid-season of the 2016 season joining the Re-Volting team as a replacement for the previous racer, T.G. Castlenut. He debuted at the Motor Speedway of the South and was one of the first six Next-Gen racers to join the competition, with the others being: Tim Treadless, H.J. Hollis, Ed Truncan, Ryan Laney, and Harvey Rodcap. In 2017, he competed in the Florida 500 at the Florida International Super Speedway where he started from the 8th position.

Aaron Clocker is a Next-Gen 2017 Race Car SA-3. He uses Lightyear racing tires. His eye color is hazel and he has a maroon livery with a red, black and white paint scheme with red, white and black stripes going across his roof and and back. He has a short spoiler similar to Tim Treadless's and Sheldon Shifter's and headlights with a blue trim just like Ryan Laney.

Aaron at his first race. 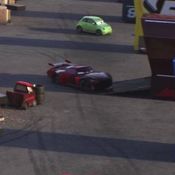 Aaron exiting his hauler for the final race of the 2016 season.

Closeup of Aaron during the LA 500.

Retrieved from "https://worldofcarsdrivein.fandom.com/wiki/Aaron_Clocker?oldid=190670"
Community content is available under CC-BY-SA unless otherwise noted.