Aaron Clocker is an American next-generation racer. He was the Piston Cup racer who takes over the Re-Volting sponsorship midway through the 2016 season, replacing their previous racer, T.G. Castlenut. His racing number is 48.[1]

In Cars 3, Aaron is one of the first six next-generation Piston Cup rookie racers, with the other five being Tim Treadless, H.J. Hollis, Ed Truncan, Ryan Laney, and Harvey Rodcap, who all debut at the Motor Speedway of the South, which hosts the race following Jackson Storm's victory at the Dinoco 400 at the Copper Canyon Speedway. Aaron also finishes fifth in the Florida 500 at the Florida International Super Speedway.

Clocker is 2017 Next-Gen SA-3 with Lightyear racing tires. He have black-red paint and racin number 48. 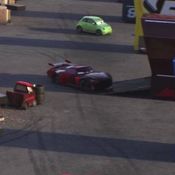 Aaron getting out of his hauler

Retrieved from "https://worldofcarsdrivein.fandom.com/wiki/Aaron_Clocker?oldid=136683"
Community content is available under CC-BY-SA unless otherwise noted.