Albert Hinkey is a 1985 Boxomatic Travel'Bout 4XL. He has been a huge fan of Piston Cup champion Lightning McQueen since his rookie days, and he remains so.

In Cars, Albert is seen sitting in the middle of the Motor Speedway of the South, among other caravans. He shouts encouraging words to McQueen after he makes it through the big wreck caused by Chick Hicks, and honks his horn loudly, much to the annoyance of the other caravans and a tiny blue car next to him. Later, he appears next to Larry and R.M. attending the race at the Los Angeles International Speedway, where he is amazed when he and the rest of the crowd notice Doc Hudson.

Albert appears in Cars 3 during the opening race sequence, in which he weaves through the infield crowd in an attempt to get a better view of the track, while shouting encouraging words to McQueen. 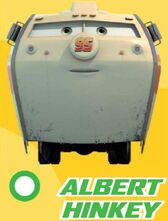 Retrieved from "https://worldofcarsdrivein.fandom.com/wiki/Albert_Hinkey?oldid=179621"
Community content is available under CC-BY-SA unless otherwise noted.