Alex Carvill is a World Grand Prix security officer that appeared in Cars 2.

In Cars 2, after the race, as he is controlling the cars entering an area, he finds himself struggling with Mater, telling him he cannot go beyond that point, and tries unsuccessfully to stop him from entering the area, thinking he is insane.

Alex is a Fiat Panda that is painted white, with a black grille and white headlights. He has the World Grand Prix logos and colors painted on his doors, and a blue siren. He wears a headset.

Alex and another guard. 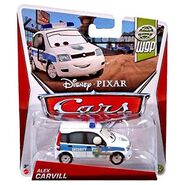 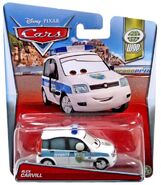 2017 WGP Packaging
Add a photo to this gallery
Retrieved from "https://worldofcarsdrivein.fandom.com/wiki/Alex_Carvill?oldid=152607"
Community content is available under CC-BY-SA unless otherwise noted.