Axxelo Motors is a fictional car trademark. It is specialized in small coupés and race cars, and it appears a lot of times in Cars and Cars 3. The Axxelo Fission greatly resembles a Chevrolet Monte Carlo. Many of the younger Piston Cup competitors in Cars are Axxelos. Axxelo is formely named Stodgey and is based on Chevrolet. 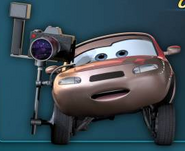 Axxelo Turnpike LX
Add a photo to this gallery

Retrieved from "https://worldofcarsdrivein.fandom.com/wiki/Axxelo?oldid=182396"
Community content is available under CC-BY-SA unless otherwise noted.