Barry Diesel is a large caravan that loves Dinoco oil. Barry is a 1975 Silver Liner Coach V-8, a design that is similar to a 1983 Winnebago Brave. He is painted cream, with green lining on his doors. He wears a large blue Dinoco hat and two large oil cans on his doors full of Dinoco oil.

In Cars, Barry is seen at the Motor Speedway of the South, sipping Dinoco oil in the center of the stadium. 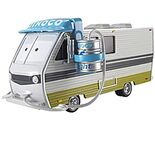 Retrieved from "https://worldofcarsdrivein.fandom.com/wiki/Barry_Diesel?oldid=146843"
Community content is available under CC-BY-SA unless otherwise noted.