Start a Wiki
watch 01:48
The Loop (Movies)
Do you like this video?
Blinkr is a sponsor for the Piston Cup Racing Series.It is a messaging application in the Cars universe. Speedy Comet raced for the team in 2016, prior to being replaced by a next-generation racer named Ryan Laney midway through the season. Both racers have the number 21. Blinkr is a messaging app on social media. The slogan is "connecting engine to engine".

Towards the beginning of the 2016 Piston Cup season in Cars 3, Speedy Comet bears this sponsor. However, after Jackson Storm wins at the Copper Canyon Speedway, Comet is fired, along with five other veteran racers, and replaced by Ryan Laney. 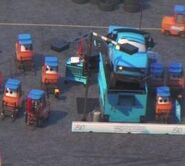