Bob Cutlass is a racing announcer for the Piston Cup.

In Cars, Bob is announcing in the Piston Cup with Darrell Cartrip. After Lightning McQueen, Chick Hicks and The King result in a three-way tie, Bob and Darrell cannot believe their eyes and are excitedly trying to decide on a winner. Both also appear at the Los Angeles International Speedway, commentating on the tie-breaker race. When Lightning pushes The King to the finish line, Bob questions whether or not the performance was against the rules, but Darrell dismisses it.

In the beta version of Cars: Fast as Lightning, Bob and Darrell appear in the skyboxes above the bleachers on Lightning's Track, announcing the races. However, they do not appear in the final version.

Bob returns in Cars 3, and once again announces Piston Cup races with Darrell Cartrip. During the Dinoco Light 350, at the Motor Speedway of the South, he and Darrell talk about how Lightning McQueen, Bobby Swift, and Cal Weathers seem to have a lot of fun on the track. During the Florida 500, he and Darrell are surprised when Cruz Ramirez enters the track from pit row instead of Lightning.

Bob is a 1998 Saxon Grand Touring Sports Coupe 3-Liter Inline Six 200 HP Sae @ 6,000 RPM, and his horsepower is 255. He is also based on a 1999 Oldsmobile Aurora, although the Aurora was never offered as a 2 door model. He is painted entirely in a dark shade of grey, having chrome rims and mirrors.

Unlike Darrell Cartrip, Bob takes his announcing rather seriously, with him usually providing the factual commentary while Darrell provides humorous information and speculation. These qualities have landed him additional announcing occupations on television and radio, such as America's Funniest Sports Utility Vehicles, tractor pulling, monster truck rallies, and even the Olympics. 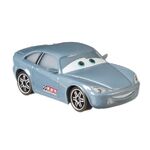 Retrieved from "https://worldofcarsdrivein.fandom.com/wiki/Bob_Cutlass?oldid=153815"
Community content is available under CC-BY-SA unless otherwise noted.