Bobby Roadtesta[1] is a professional Piston Cup racer who was sponsored by team Carbon Cyber. However, next-generation racers began to garner attention for their unmatched speed and ability. Bobby is fired by Carbon Cyber and replaced by an unnamed next-gen.

In Cars 3, Bobby competes in the 2016 Piston Cup season, but when next-generation rookies began performing much better than stock cars, before the Gears and Glory 450, Carbon Cyber fires Bobby and replaces him with an unnamed next-gen rookie. 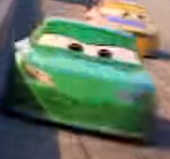 Retrieved from "https://worldofcarsdrivein.fandom.com/wiki/Bobby_Roadtesta?oldid=125585"
Community content is available under CC-BY-SA unless otherwise noted.