Bobby Roadtesta[1] is a professional Piston Cup racer who is sponsored by Carbon Cyber. However, next-generation racers began to garner attention for their unmatched speed and ability, and Bobby is fired by Carbon Cyber and replaced by Jim Reverikku. His racing number is 67.

In Cars 3, Bobby competes in the 2016 Piston Cup season, but when next-generation rookies began performing much better than stock cars, Carbon Cyber fires Bobby and replaces him with a next-generation racer named Jim Reverikku. 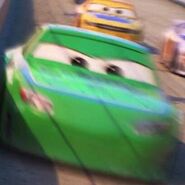 Bobby racing at the Dinoco Light 350.
Add a photo to this gallery

Retrieved from "https://worldofcarsdrivein.fandom.com/wiki/Bobby_Roadtesta?oldid=136094"
Community content is available under CC-BY-SA unless otherwise noted.