Bobby Swift is a professional race car who competed in the Piston Cup Racing Series, before being replaced by next-gen racer Daniel Swervez. He is a Brawny Motor Co. Spark EA.[2] He raced for the Octane Gain team and replaced Billy Oilchanger, and befriended many of his fellow competitors, most notably Lightning McQueen and Cal Weathers. The three friends constantly placed within the top positions, and remained mostly unmatched until a new rookie named Jackson Storm made his debut, and easily overpowered the other racers.

As the 2016 Piston Cup season begins, Swift, McQueen, and Weathers are at the top of their game. The three racers are consistently battling it out in the top three positions, and having a blast throughout. The three friends enjoy playing pranks on each other -- for example, when McQueen is being interviewed after winning a race, Bobby and one of his pit crew throw whip cream and confetti on him.

In the Dinoco 400 at Copper Canyon Speedway, Swift and McQueen are neck-in-neck while rounding the final turn, and the announcers highlight this. Suddenly, however, a new racer named Jackson Storm speeds by them right at the end, and wins the race. As Storm drives onto the winners podium, McQueen wonders who he is, and Bobby and Cal inform him that Storm is one of the rookies.

Because of Storm's stellar performance, many Piston Cup teams realize that next-generation racers are far more capable than traditional stock cars, and begin replacing their racers. On the day of a race, McQueen arrives to find that many of his friends have been replaced, and even witnesses Brick Yardley being fired. Nervous, McQueen goes to Bobby to ask him what is going on, only to find that he has been replaced, as well. A next-generation racer named Danny Swervez introduces himself, and drives away, leaving McQueen even more nervous than before. 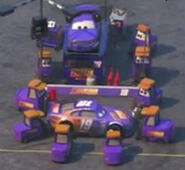 Retrieved from "https://worldofcarsdrivein.fandom.com/wiki/Bobby_Swift?oldid=103585"
Community content is available under CC-BY-SA unless otherwise noted.