Start a Wiki
watch 01:27
The Loop (Movies)
Do you like this video?
Brent Mustangburger is an announcer for the Racing Sports Network.

Brent Mustangburger is an American sports-broadcasting icon. With the self-proclaimed “best stall in the garage,” the excitable 1964½ Ford Mustang is widely considered one of the most recognizable voices in the history of automobile sports television and associated with some of the most memorable moments in modern sports. At the World Grand Prix, Brent will be calling the turn-by-turn action with informed analysis and unparalleled zeal.

In Cars 2, Brent is one of the 3 announcers of the World Grand Prix along with David Hobbscap and Darrell Cartrip.

In Planes, he appears as the announcer of the Wings Around the Globe.

Brent is painted dark blue, with the RSN logo painted on each of his doors. He has chrome rims, and wears black headphones.

His licence plate is BWM539. It represents the initials and the birthday (May 1939) of his voice actor Brent Woody Musburger.

Brent works for the Racing Sports Network, as one of the announcers. He was also one of the three hosts of the World Grand Prix.

"Welcome, everyone, to the second race of the World Grand Prix."
—Him announcing the Porto Corsa race. 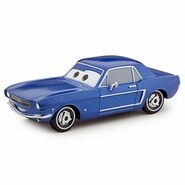 Disney Store
Add a photo to this gallery
Retrieved from "https://worldofcarsdrivein.fandom.com/wiki/Brent_Mustangburger?oldid=57809"
Community content is available under CC-BY-SA unless otherwise noted.