View source
watch 03:36
Wiki Targeted (Entertainment)
Do you like this video?
Play Sound

Brian Spark was a stock race car, that around late 2010s, was a racing driver who competed in the Piston Cup Racing Series for Leak Less team with number 52.

Brian Spark was a stock race car that lived in the United States. He was a racing driver who, around late 2010s, competed in the Piston Cup Racing Series for the Leak Less team with number 52. In 2016, in the midseason, with the rise of popularity of high-tech next-generation series of race cars, that had better achievements on the tracks, he stopped competing in Piston Cup and got replaced by Leak Less with George New-Win.

Meeker was an Axxelo Fission EA stock race car with Lightyear racing tyres. His eyes were hazel. He had yellow livery with white and black details. On his hood, he had the Leak Less logo inside of a black stripe. He had white doors with black dots and the racing number 52. He had a black oil splash design on his face. He also had a black spoiler and rims.

Brian next to McQueen in the Cars 3 Oscaro commercial. 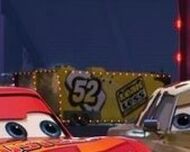