In Cars 3, Bubba joined the Transberry Juice team for the Piston Cup Racing Series, serving as a replacement for the previous racer, Markus Krankzler. He debuted in the mid-season at the Rustbelt Raceway where he finished in seventh place. Later he finished fifth at the Mood Springs Sputter Stop 350 at the Georgia Super Speedway and fifteenth at the Heartland Motor Speedway. He started from the nineteenth position during the Los Angeles 500 at the Los Angeles International Speedway.

Before the Florida 500 race, Bubba was interviewed on where he thinks Lightning McQueen could have been, as he was preparing for the race. He said that it would probably be the best if Lightning did not appear due to the end of last season, during which he had experienced a serious accident. He started the race from the 27th position. During the race, Cam Spinner ended up causing a crash between a majority of the racers, with Bubba maneuvering through the wreck He had finished the race 6th. After crossing the finish line, he, Danny, Chase and Ryan congratulated Cruz Ramirez on winning the race. He had made a joke that her blinker was on rather than directly congratulating her. A similar joke that McQueen pulled on Cal Weathers during a race in the 2016 season.

Bubba Wheelhouse is Next-Gen 2017 Race Car SA-3. He, like most Piston Cup racers, used Lightyear tires. His eye color is blue. He has a purple livery, with a blue stipe on the hood and around his side windows. On his doors he has a yellow stripe that transitions into a bunch of circles. He has the number 6, painted in yellow, on his doors and roof. He has dark blue spots on his hood and on the back of his sides. His rims are black. His headlights have a blue trim on them. 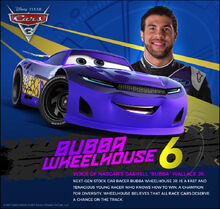