"Maybe it's best if he doesn't show up. You know, after how last season ended?"
—Bubba Wheelhouse being interviewed by RSN, Cars 3

Bubba Wheelhouse is a next-generation Piston Cup racer.[1] His number is 6, and he is sponsored by Transberry Juice. He is a Next-Gen 2017 Race Car SA-3. [2] He takes over the Transberry Juice sponsorship from Markus Krankzler after the latter got fired.

In Cars 3, Bubba debuts at the Georgia Motor Speedway and finishes in 5th place. He finishes in 15th place at the Heartland Motor Speedway. In the Los Angeles 500, he starts in 19th. where he starts out in 15th behind Chase Racelott. Before the Florida 500, Bubba is interviewed on where he thinks Lightning McQueen might be, and he says that its probably best if Lightning doesn't appear due to the end of last season. During the Florida 500, a wreck started due to Cam Spinner losing control and Bubba is seen maneuvering through the wreck with McQueen. After Cruz Ramirez wins the Florida 500, Bubba did the blinker joke on Cruz rather than congratulating her. He finishes in 20th place. 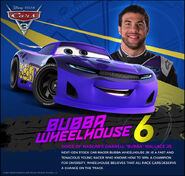 Retrieved from "https://worldofcarsdrivein.fandom.com/wiki/Bubba_Wheelhouse?oldid=136768"
Community content is available under CC-BY-SA unless otherwise noted.