Bud is a caravan that appears in Cars. He is seen at the Motor Speedway of the South, among hundreds of other caravans, drinking Dinoco oil.

He is a Luckeyliner Gentleman that is painted white, and has a large mural of Jackalope from Boundin' painted on his back.

"Bud's a classy rig and long-time Piston Cup loyalist who's got a funny anecdote for every racer on the track. For just a few liters of Dinoco oil, he'll probably spill a secret or two."[1] 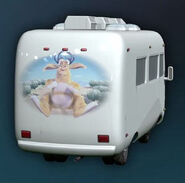 Bud's front, as revealed in a magazine

Retrieved from "https://worldofcarsdrivein.fandom.com/wiki/Bud?oldid=152112"
Community content is available under CC-BY-SA unless otherwise noted.