Cars: Mater-National Championship
Buford is one of Mater's cousins. Since his debut appearance in Cars: The Video Game, he has become a recurring character in the Cars series, making several appearances in the video games, as well as in the World of Cars book which details his background. Despite his appearance, Buford is actually a talented demolition derby racer. His license plate is completely blank, although there appears to be a stain on it, which means it could have previously read "Buford".

Buford is a rusty blue demolition derby race car that has his number on his front-end boards and a rusty bumper. He appears to be a 1983 Dodge Aries Coupé or 1983 Plymouth Reliant Coupé. In his video game appearances, Buford has the number 20 painted on his doors and number boards, but in World of Cars, he has the number "7". He also has six pinstripes in the games, but only four in the book and on his die-cast model.

The World of Cars book reveals that Buford, along with Mater, Cletus and Judd, were bullied by Bubba and one of his friends when they were younger. However, Mater challenged Bubba to a backwards race, and since he could not successfully make a turn around Stanley's statue, he lost and Bubba subsequently stopped bullying the four cousins.

In Cars: The Video Game, Buford's only appearance is as a competitor in the event Rustbucket Race-O-Rama, in which he competes against Mater and five of his other cousins. Like the other Rustbucket racers, Buford is not playable.

In Cars: Radiator Springs Adventures, Buford and his cousins appear in the minigame Tow the Line, in which they must be towed to the other side of Mater's junkyard.

In Cars: Mater-National Championship, Buford makes his first appearance in the cutscene for Rustbucket Race #1, staring at Emma as she practices, along with the rest of his cousins except for Mater. When Mater says to "act natural", Buford reacts by slamming head-on into Tommy Joe, but he ends up with his front tires on Tommy Joe's windshield. Buford's body covers up most of Mater from Emma. He later appears as an opponent in Rustbucket Races #1, #2, and #3, where he tends to place higher with each event, though he is rivaled by Tommy Joe. 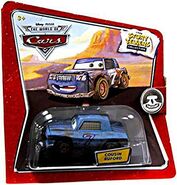