Bulldog is a British racing plane.

Bulldog has been racing longer than every other racer on the circuit. As the oldest and arguably wisest, he remembers a time before GPS, when real racers trusted their gyros and navigated by the stars. When it comes to racing, it boils down to two qualities, says Bulldog: good flying and sportsmanship. Period. While the competition secretly wonders if the aging plane is past his prime, he flies his way onto the leader board again and again, proving that this Bulldog has lost none of his bite.

Bulldog is painted in the colors of the Union Jack, red, white and blue, with the number 11 painted on his rear fin.

Bulldog with two of his pitties 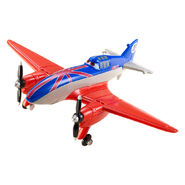 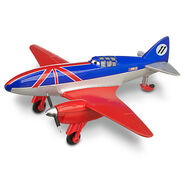 Disney Store
Add a photo to this gallery
Retrieved from "https://worldofcarsdrivein.fandom.com/wiki/Bulldog?oldid=50512"
Community content is available under CC-BY-SA unless otherwise noted.