Carl Clutchen is a stock car that used to compete in the Piston Cup Racing Series for the Easy Idle team with the number 15.

In Cars 3, Carl Clutchen competes in the Piston Cup Racing Series during the 2016 season. In 2016, he had finished 5th in the Dinoco Light 350 race at the Motor Speedway of the South and 7th in the Iowa Hybrid 450 race at the Rocker Arms International speedway.

However during the midseason, with the rise of interest in high-tech Next-Generation series of race cars, that had better achievements on the tracks, he stopped competing in the Piston Cup and was fired by Easy Idle and got replaced by a Next-Gen racer, Harvey Rodcap, the current racer for Easy Idle.

Carl Clutchen is a Brawny Motor Co. Spark EA stock car with Lightyear racing tires. His eye color is blue. He has a blue livery with some white bold stripes on the back of his sides. He has the number 15, painted in black, on his sides and the roof and the logo of Easy Idle on his hood, boot, back and sides. 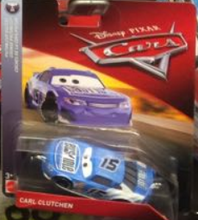 Names in Other Languages