"You're so cute trying to be so fast."
—Carla Veloso

Carla hails from Rio de Janeiro, Brazil where she’s been known to dance the night away at the famous ‘CAR-nival’ but nothing makes her happier than being on the racetrack. Carla was drafted into the 24-hour endurance racing team in Europe after setting a new track record on her local circuit. Now, in the World Grand Prix, this proud Brazilian Le Motor Prototype racer, wearing #8, is the only female in the field.

In Cars 2, Carla is an Brazilian race car who competes as the only female racer, the #8, for the World Grand Prix. She is one of the greatest competitors. She is seen in all three races and also in the one at Radiator Springs. She finished 3rd in the Tokyo Race, and was also seen in the Porto Corsa Race at the 3rd position. But later, her engine exploded due to the Lemons' machine, used by Grem. Along with Francesco Bernoulli and Lightning McQueen, she is the fastest racecar from all. She is the first car hit by the lemons's radiation beam. She gets fixed though and gets back up to race. In London, her pit was next to Jeff Gorvette's pit on the left. She has no lines in the film.

In Cars 2: The Video Game, Carla is a playable character, unlocked once access to Clearance Level 2 is granted. She is a medium weight, and has more speed than she does power.

In Disney Infinity, Carla can be seen as an opponent during races in the Cars Play Set.

In A Friend in Trouble, Carla and her team have noticed that their equipment has gone missing, so she and Lightning team up to find them. They find the objects, but also use help from other competitors and teams.

Carla is painted green and blue, with a large blue spoiler sporting the words "World Grand Prix". She has blue rims, and grey and orange headlights. She has white dots on her doors and hood.

Carla is a Brazilian race car.

Carla Veloso at the Tokyo Party in the Brazilian version

A far away view of her pitties 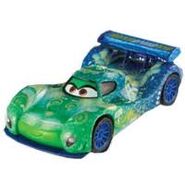 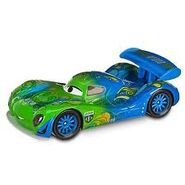 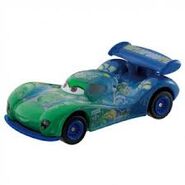 Wood
Add a photo to this gallery
Retrieved from "https://worldofcarsdrivein.fandom.com/wiki/Carla_Veloso?oldid=59710"
Community content is available under CC-BY-SA unless otherwise noted.