World of Cars Wiki
Register
Don't have an account?
Sign In
Advertisement
in: Stubs, Cars: The Video Game

This is a list of beta elements for the game Cars: The Video Game. 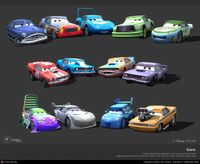 One of the artists for the game, Mark Van Haitsma, released character concept artwork on his website, showcasing some of the differences from the character artwork to their actual models. Sonny's spoiler folds were originally pointing down, but were later changed to point up. Additionally, Cortland's racing number was to be 4, but was changed to 191 for unknown reasons.

More content can be found in the localization files: