World of Cars Wiki
Register
Don't have an account?
Sign In
Advertisement
in: Cars Land, Attractions, Places and Locations
English

Cars Land is an attraction that opened as part of Disney California Adventure Park on June 15th, 2012. The design is based on Radiator Springs.

Radiator Springs Racers is the biggest attraction. It's 6 acres big out of the 12 acres total, half of Cars Land. You ride in cars, one racing with another. One of the cars will be yellow, and the other will be red.

A C-Ticket attraction in the style of a whip ride and the Mad Tea Party, at Disneyland, without spinning out of control. The attraction is themed to Mater's Junkyard and also the fields with tractor cows from the first film. Mater will be the Master of Ceremonies of the Jamboree. The vehicles will be tractors with pull cars attached to them that move around with the music.

This attraction will be an updated and safer version of the original Disneyland attraction Disneyland Flying Saucers and will feature the distinct theming of the movie Cars. Guests will queue in the Casa Della Tires shop. A play area featuring a tire jungle gym, slide and kid-sized cars will be located next to the attraction. 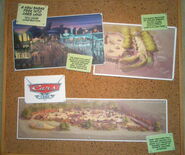 A view from satellite: Cars Land in construction 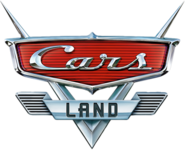 Cars Take Flight is a competition where people make videos of themselves saying their favorite Lightning McQueen or Mater's lines from the Cars Toons episodes Air Mater and Moon Mater to win a vacation to Cars Land. The videos have to be under 30 seconds. The competition ended October 7, 2012.