The Cars Play Set is one of the play sets in Disney Infinity. Race to Radiator Springs to help Lightning, Holley,Tow Mater and Francesco prepare for an International Race Invitational.' B'ut watch out! Chick Hicks is about to put the skids on everything. Get in gear with our heroes plus Finn McMissile, Fillmore, Ramone and Flo and stop Chick in his tracks!

The Cars Play Set was released on August 18th, 2013, and is based on the Pixar movie Cars and its sequel. The play set takes place in Radiator Springs after the events of Cars 2.

Lightning, Mater and Francesco in the Play set 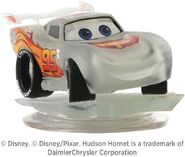 A cutscene Showing The king Francesco and Chick

Bonus Card in the Play set
Add a photo to this gallery
Retrieved from "https://worldofcarsdrivein.fandom.com/wiki/Cars_Play_Set?oldid=158727"
Community content is available under CC-BY-SA unless otherwise noted.