Cartney Brakin is a small car and a huge Lightning McQueen fan.

He is seen playing with an RC McQueen toy inside a store full of McQueen merchandise, during the Tokyo arrival scene. Upon meeting McQueen and Mater, he faints with excitement to have his idol in front of him.

Cartney is painted in the same paint scheme as Lightning McQueen, with a giant yellow lightning bolt on his roof.

His model is currently unknown.

According to his die-cast, Cartney's license plate is 06-23.

Cartney, McQueen and Mater in the store
CartneyBrakinDiecast.jpg
Diecast 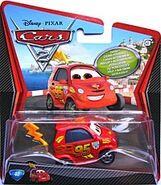 Boxed diecast
Add a photo to this gallery
Retrieved from "https://worldofcarsdrivein.fandom.com/wiki/Cartney_Brakin?oldid=56950"
Community content is available under CC-BY-SA unless otherwise noted.