Chase competes in the 2016 Piston Cup season in Cars 3. He enters the season as a mid-season replacement for the previous Vitoline racer, Brick Yardley after he got fired. Chase started in 22nd in the Los Angeles 500, at some period, he is dueling Bubba Wheelhouse, Jr.  and Aaron Clocker. At some point he and Danny Swervez passed every next-gen and stock car except for McQueen and Storm and are in 3rd and 4th place battling for positions against each other. However Chase is no match for Danny. When Lightning leaves the pits, they are both in 2nd and 3rd place until Jackson Storm passes them [4] and, along with Daniel Swervez passes Lightning McQueen right before he crashes. At the Florida 500, he started in 9th and is later involved in the accident caused by Cam Spinner and is seen sliding out of control and hits the wall, but he is able to continue. Later he is seen entering his pits safely. He restarts in 4th and for the rest of the race he is seen next to Flip Dover and the next-generation Spare Mint racer and Then finishes In 10th Place. After the race, he congratulates Cruz on her win. 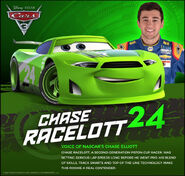 Making his way into pit row.

Chase and Daniel about to pass McQueen 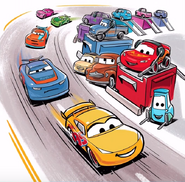 Chase in a book 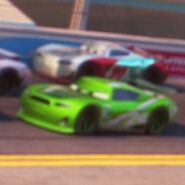 Chase in the crash

Retrieved from "https://worldofcarsdrivein.fandom.com/wiki/Chase_Racelott?oldid=136688"
Community content is available under CC-BY-SA unless otherwise noted.