Chip Gearings[2] is a race car who competes in the Piston Cup Racing Series. He is sponsored by Combustr, and his racing number is 11. Also, he is a Brawny Motor Co. Spark EA.

In Cars 3, Chip competes in the 2016 Piston Cup season. But when the next generation rookie racers begin performing much better than the veteran racers, before the Gears and Glory 450, Chip either retires or gets fired by Combustr and replaces him with a next generation racer named Chris Roamin'. 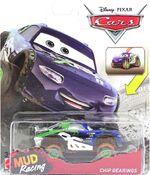 Retrieved from "https://worldofcarsdrivein.fandom.com/wiki/Chip_Gearings?oldid=155477"
Community content is available under CC-BY-SA unless otherwise noted.