Chris Roamin'[1] is a "Next-Gen" race car who competes in the Piston Cup, sponsored by Combustr. He takes over the Combustr sponsorship from their previous racer, Chip Gearings, during the 2016 season. His racing number is 11.

Chris competes in the 2016 Piston Cup season in Cars 3. He enters the season as a mid-season replacement for the previous Combustr racer, Chip Gearings after he got fired. He debuts at the Heartland Motor Speedway, finishing in 11th. He later appears at the Los Angeles 500 starting in 5th place next to Cam Spinner . He finishes the race in 6th place. In the Florida 500, He was seen racing in the back positions. After Cam Spinner causes the crash, Chris restarts in 22nd position behind Eric Braker . Chris Finishes in 23rd position. 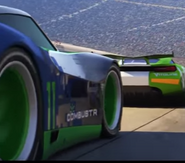 Chris being interviewed with Cam Spinner

Retrieved from "https://worldofcarsdrivein.fandom.com/wiki/Chris_Roamin%27?oldid=135632"
Community content is available under CC-BY-SA unless otherwise noted.