Sonoko Konishi[1]
Chuki is a reporter for OEM news. She is also the lead singer of "Grid Lock", an infamous rattle and roll band, and has won several awards and nominations for her talent.

In Cars, she appears as one of the news reporters who reports to all of Japan about Lightning McQueen's disappearance.

In Tokyo Mater, Chuki appears on one of the digital billboards located in the background when Mater arrives in Tokyo. She appears to be reporting about Kabuto.

In Cars 2, Chuki appears on a television on top of one of the skyscrapers when McQueen, Mater, Luigi, Guido, Sarge and Fillmore arrive in Tokyo.

In Cars 2: The Video Game, Chuki is one of the playable characters, occasionally seen competing in races around Tokyo. She is unlocked when the player levels up to Clearance Level 6. As a lightweight character, she can go at fast speeds.

Chuki is painted bright pink, with gray rims and short, pink mirrors. Although the Car Finder game says she is a 2006 Microcaster Chickmonk, she resembles either a hatchback Kei car, which is a little car with 64 horsepower and a 660cc engine, or a Mitsubishi Mirage hatchback. She also represents Japan's "kawaii" (meaning "cute" in Japanese) design.

In Cars 2: The Video Game, she appears to be colored hot pink.

Chuki is a reporter for the OEM news during the day, and a singer at night. 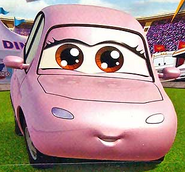 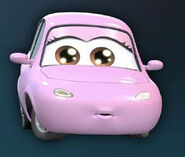