Cigalert[1] is a female demolition derby car who regularly competes at the Thunder Hollow Speedway's Crazy Eight. She has a red, white, and blue livery based on the American flag, as well as the number 22 crudely painted on her doors.

In Cars 3, Cigalert competes in a demolition derby event at Thunder Hollow. She opposes newcomers Lightning McQueen and Cruz Ramirez, but is ultimately eliminated from the competition, with Ramirez winning in the end. Miss Fritter pushes her, making her collide with Bill and Patty, and later on, APB hits her. She gets stuck on a tire and is eliminated. 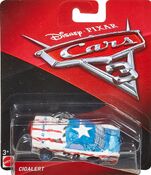 Retrieved from "https://worldofcarsdrivein.fandom.com/wiki/Cigalert?oldid=159498"
Community content is available under CC-BY-SA unless otherwise noted.