Coriander Widetrack is a character in Cars. While she is seen attending the tie-breaker Piston Cup race at the Los Angeles International Speedway, she does not care about the racing, but enjoys watching Marco, Stu Bop, and a third jet fly above the stadium.

Widetrack is a Capitol Motors Verve Jr that is painted purple. When watching her favorite jets, she sometimes holds a Marco souvenir on her mirror.

"Young Coriander Widetrack has no interest in racing; her eyes are on the skies. While the other cars in school race around the playground pretending to be Lightning McQueen, Coriander turns that blacktop into blue sky, imagining she's soaring 10,000 feet in the air and racing to exotic destination. It's Coriander's dream to someday meet her idol, jet fighter Marco."[1] 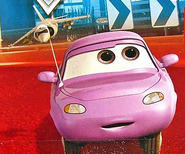 Coriander alongside Brake Boyd and M.A. Brake Drumm in Cars

Retrieved from "https://worldofcarsdrivein.fandom.com/wiki/Coriander_Widetrack?oldid=180140"
Community content is available under CC-BY-SA unless otherwise noted.