Count Spatula is a monster truck, that first appears in Cars: The Video Game, in which he comes to Radiator Springs alongside Ginormous and The Crippler, to challenge Lightning McQueen to a monster truck rally race.

In Cars: The Video Game, Count Spatula, The Crippler and Ginormous arrive in Radiator Springs, to challenge Lightning McQueen to a monster truck race at the Rustbucket Stadium. When Lightning accepts, the four compete in a twelve-lap race, that brings in many fans from all around Carburetor County. Once Lightning wins, they are not seen for the rest of the story mode.

Count Spatula can be unlocked as a playable character in the Arcade and Versus modes by purchasing him for 15,000 bonus points in Ramone's House of Body Art. He is playable in some road races, though he cannot be selected for Rustbucket Race-O-Rama, Sally's Wheel Well Sprint, Tailfin Pass Circuit, Delinquent Road Hazards and Tailfin Pass Grand Prix. While he has poor handling and stability stats, his speed and acceleration stats are high.

Count Spatula makes his third, and, so far, last appearance in Cars: Race-O-Rama. There are five Monster Truck Races and Count Spatula appears in all of them, except in the PlayStation 2 version, in which he does not appear in at all. Like in Cars: Mater-National, he is not a playable character.

Count Spatula is one of the tallest and largest Cars characters, rivaling the size of other monster trucks. He appears to be modeled after a 1955 Chevrolet pickup truck modified into a monster truck. He is painted grey, and has several modifications, including pipes on each side that release fire. He has large tires and two horns that are similar to Sulley's.

Count Spatula speaks and behaves in a threatening manor, often shouting food-related threats at his opponents. His large size creates a menacing appearance, leaving other cars scared of him.

Count Spatula is apparently very strong but lacks speed and agility. His size enables him to accomplish tasks that smaller cars are unable to do.

Count Spatula at the character select screen in Cars: The Video Game 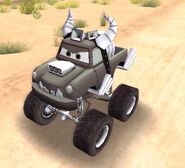