Crash Course! is a book.

While Lightning McQueen is enjoying teaching at the Fabulous Hudson Hornet Academy in Radiator Springs, even racing against his mentor between classes to keep in shape, Chick Hicks stays preoccupied with instructing his own racing students in the "Three C's:" cheat, cheat, and cheat!

A two-car race event is announced as part of the Race-O-Rama series, and Chick and Switcher square off against Lightning and Mater. Positioned behind them are several more of Chick's racing students and the Piston Cup racers. Chick's partner, Switcher, releases an oil slick that seemingly leaves him destined to win, but when he tells his mentor he'll see him at the finish line, Chick takes offense at the idea of coming in second to one of his students and rams Switcher into a wall, injuring him in a rollover wreck. Taking advantage of their opponents' fight, Lightning and Mater finish first and are awarded the Silver Tailfin trophy. 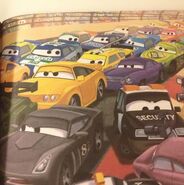 A car resembling Finn McMissile racing in the two-car event
Add a photo to this gallery
Retrieved from "https://worldofcarsdrivein.fandom.com/wiki/Crash_Course!?oldid=51263"
Community content is available under CC-BY-SA unless otherwise noted.