DJ is a member of the Delinquent Road Hazards.

From an early age, DJ, whose full name is Devon Montegomery Johnston the Third, was interested in all kinds of music. He had a voracious appetite for collecting records and was a gifted student at the nationally renowned East Coast Music Conservatory. One evening at a friend's party, Devon met a gentleman by the name of Wingo. An expert in paint and body modification, Wingo designed a custom paint job for Devon and a wicked sound system to match. Now going by the name DJ, Devon revels in his treble but never loses touch with his bass!

In Cars, DJ is a member of the tuner cars. He has a built in sound system. He and the other tuners were driving along the Interstate when they noticed a sleepy Mack. They decide to have fun with him, with DJ playing Kenny G's Songbird to cause Mack to sleep, until Snot Rod's loud sneezing causes them to flee the scene. DJ later appears in the epilogue when he and the other tuners were caught by Sheriff and were impounded. They were later sent to pull Bessie, in which some hot tar splashed on them.

In Cars: The Video Game, DJ was a part of the tuner gang that stole Lightning McQueen's racing career, under employment of Chick Hicks. He was later arrested for his crime.

In Cars: Radiator Springs Adventures, DJ, along with the rest of his gang, are the speeders that Sheriff must catch in the mini-game Speed Trap.

In Tokyo Mater, DJ, Boost and Wingo are drifting recklessly on the main road, before they get caught by Sheriff. Once Mater sees their modifications, it leads him into his story of how he was a highly modified drift racer once.

In The World of Cars Online, the tuners appear at random times, being chased by Sheriff throughout the various roads the game has to offer. They can also be raced against if the player does not wish to race against real players.

In Cars 2: The Video Game, DJ appears as a playable character, and can be downloaded in the Xbox 360 and PlayStation 3 versions of the game. He is a medium weight, and he has more power than speed.

In Cars: Fast as Lightning, photos of DJ driving around a race track with other cars were released, but it is unknown if he will be playable or just a computer character.

In Mater Saves Christmas, DJ and his gang helped Chick steal supplies from the townsfolk. He was later caught and arrested.

In The Pit Stop, DJ is once again arrested for speeding.

DJ is a delinquent that appears to not pay attention to the rules, as he and his gang are constantly getting arrested for breaking the law. He has a love for practical jokes, as he and his friends put Mack to sleep in the middle of the highway.

DJ has a large tuner spoiler and built in subwoofers and speakers. He is painted completely blue, with green lining on his doors. He also has volume speakers in his rims, as shown when he drives.

DJ wreaks havoc throughout Radiator Springs and other places, by pulling pranks and commiting crimes.

DJ as he appears in Tokyo Mater. 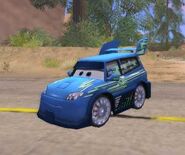 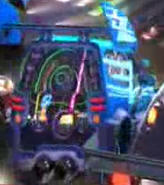 DJ at the party in Tokyo Mater 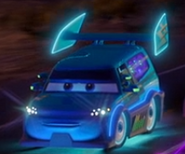 DJ in the slow lane beside the other Tuners

DJ drifting in Radiator Springs with Wingo and Boost 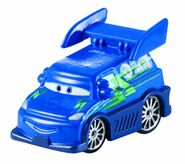 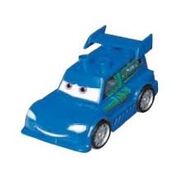 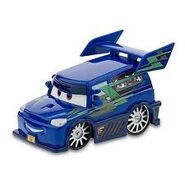 Add a photo to this gallery
Retrieved from "https://worldofcarsdrivein.fandom.com/wiki/DJ?oldid=59906"
Community content is available under CC-BY-SA unless otherwise noted.