Not to be confused with the voice actor.

Racing sensation Dale Jr. has wasted no time gathering victories and creating a commanding track presence since winning Piston Cup Rookie of the Year honors in 2000. His drive and charisma have scored with fans too - he's earned the Piston Cup Most Popular Driver Award four years running! But when it's all said and done he's just a shy guy, who enjoys quiet time with friends and family.

In Cars, Dale is first seen during the race at the Motor Speedway of the South, as one of the competitors. He is later seen in an interview about Lightning McQueen falling out of his trailer, and again at the final race, wishing The King good luck.

At the very end of the film, Dale is touring the racing museum with Lynda Weathers and The King, wondering where Doc went.

Dale is painted maroon, with the number 8 painted in white on his doors and roof. He has the Budweiser logo on his hood, as well as his fenders, and several Piston Cup sponsor stickers on his doors.

Junior is an Axxelo Fission, which is identical to the NASCAR Chevrolet Monte Carlo SS.

Dale is a famous Piston Cup racer that has won several awards, such as the Piston Cup Most Popular Driver Award.

"I just hope Lightning's okay. I sure would hate to see anything bad happen to him."
—Junior's worries about Lightning McQueen

Junior: "Hey King, good luck in your last race. You've sure been an inspiration to me."
The King: "Thanks, Junior. Appreciate it."
—Junior and The King, before the tie-breaking race

Junior: "Wow, unbelievable, that many wins in a single season."
The King: "He's the real deal, Junior. The Hudson Hornet was my inspiration."
—Junior and The King 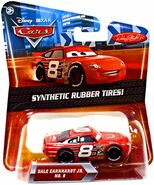 Add a photo to this gallery
Retrieved from "https://worldofcarsdrivein.fandom.com/wiki/Dale_Earnhardt,_Jr._(race_car)?oldid=56216"
Community content is available under CC-BY-SA unless otherwise noted.