Danny Swervez is a Piston Cup Next-Gen of the 2017 Race Car SB-4 model who appeared in Cars 3, racing for Octane Gain. He replaced Bobby Swift after he got fired in the mid-2017 season.

In Cars 3, Danny entered the 2016 Piston Cup season, as a last season replacement for Bobby Swift as the racer for Octane Gain for the last 2016 Piston Cup race. He competes against the likes of Lightning McQueen, Chase Racelott, Jackson Storm and many others, proving himself a worthy opponent. For most of the race, he is seen battling McQueen and Chase. Before McQueen crashes, he and Chase Racelott pass him. After the restart, he ends placing second behind Jackson.

During the 2017 Florida 500, he starts second, and remains in this position for most of the race. At some point, he takes the lead from Jackson Storm; When the race is almost over, Danny is still in second. When Jackson becomes nervous of Cruz Ramirez ascending up the ranks, he slows down to try to discourage her, allowing Danny to take the lead. Danny looks at Jackson, confused, but then focuses on the race. Jackson retakes the lead after telling off Cruz. Danny is passed by Cruz and ends up finishing the race in third. After the end of the Florida 500, he congratulates Cruz on her win. 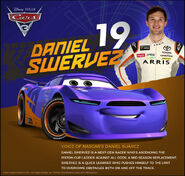 Names in other idioms