Darren Leadfoot is an Axxelo Fission that races for the Shiny Wax team in the Piston Cup Racing Series. He is painted lime green, with the number 82 painted on his doors and roof. The Shiny Wax logo is printed on his hood, as well as on his trunk. He also has a two-piece grill that not all racers have.

Darren appears in Cars, during the Dinoco 400 at the Motor Speedway of the South. He is involved in a huge accident caused by Chick Hicks. He almost hits Floyd Mulvihill in the accident. However, Darren is able to continue racing, despite receiving some minor damage.

In Cars 3, he competes in the 2016 Piston Cup season, against many Next-Gen racers. He can still be seen racing at the Los Angeles International Speedway, and then after that, Shiny Wax fires Darren and he gets replaced by a next-gen racer named Conrad Camber for the 2017 Florida 500.

"Darren Leadfoot is the LAST guy you want drafting you on the final turn. Known for his sudden 11th-hour accelerations, Darren's one car who won't let anything - or anyone - stand between him and the finish line!"[1] 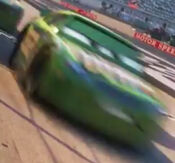