Darth Mater (or Darth Vader), is sith and soldier of Galactic Empire. He is father of Luke Skywalker and Princess Leia.

During Comic-Con 2008 at out of this world event was presented model of Darth Mater who was mixed of Tow Mater and Darth Vader. In 2013 meke Cars and Star Wars crossover collectible diecast with him.

Mater's make model is a Haulital Hook'em. He is mix of a 1951 International Harvester L-170 "Boom Truck", One Ton Wrecker combined with some pieces of a Chevrolet 3800 and an old 1957 Dodge Series C.

He has a V-8 engine with a two-barrel carburetor. He can go zero to sixty in ten seconds, with a top speed of 90 miles per hour, with 200 horsepower. 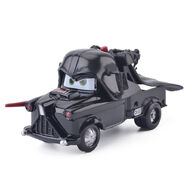 Add a photo to this gallery
Retrieved from "https://worldofcarsdrivein.fandom.com/wiki/Darth_Mater?oldid=143304"
Community content is available under CC-BY-SA unless otherwise noted.