The Dinoco Light 350 was an event in Cars 3. It took place at the Motor Speedway of the South, being the first and fifth race in Cars 3. Both Lightning McQueen and Jackson Storm have won a race there.

The race begins off with McQueen passing Bobby Swift and the Rev-N-Go Racer, then Cal Weathers a couple of seconds later. Apparently, it was the twenty-third lap. Later, he passes Jack DePost and is behind Dino Draftsky. Sally Carrera and Mater are cheering for him in the pits. Maddy McGear's mother and Albert Hinkey are also cheering for him. Cal is in the lead until Lightning tells him his blinker is on. Cal panics until he finds out his blinker is not on, and Bobby passes him. After that, Bobby takes second place with Lightning, Cal, Brian Spark, Brick Yardley, and the Apple racer behind him. McQueen passes him and then passes Phil Tankson for first place with Brick having second place. After McQueen, Swift, and Weathers go to the pits on lap 356, Yardley takes first place for a certain amount of time, with Bobby Roadtesta in second, Darren Leadfoot third, Phil Tankson 4th, Rev-N-Go Racer 5th, Chip Gearings 6th, Buck Bearingly 7th, and Floyd Mulvihill 8th. The three friends go to the pits along with Brian, the Apple racer, Bruce Miller, and Phil. McQueen, Swift, and Weathers are the first three out of the pits, and McQueen soon passes Dino Draftsky, Carl Clutchen, and Jack DePost. Later, he, Bobby Swift, Cal Weathers, and Brick Yardley pass Speedy Comet and Reb Meeker to take the top four positions. 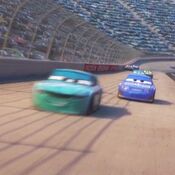