Start a Wiki
watch 01:48
The Loop (Movies)
Do you like this video?
Wikipedia has an article related to:
Doc Hudson
Doc Hudson was a former racing legend. Up until his death, he was the Radiator Springs judge and doctor.

Doc was Radiator Springs' resident judge and doctor. He was once one of the most famous racecars in history; he won three Piston Cups, and still holds the record for most wins in a single season. However, it all changed for Doc when he was involved in a terrible crash during the final lap of the 1954 Piston Cup championship race, which saw him put out for the season. Upon his return, he was received with a complete absence of fanfare and told that he was a has-been who had been passed up for the next rookie in line. He kept a newspaper article on the career-ending crash as a reminder never to return to the life that nearly killed him.

Jaded by the racing scene, he left that world, apparently taking out time to study medicine. The famous #51 disappeared into obscurity, leaving many wondering where he had gone. He instead opted for a simple navy blue paint job and the life of a physician in the tiny town of Radiator Springs, the "shining Gemstone" of the Mother Road - Route 66. He runs Doc's Clinic as a "doctor of internal combustion". As times changed and the town got bypassed in favor of Interstate 40, Doc stayed on, even when the population had dwindled to a meager dozen or so residents. He is respected, well-loved, and serves not only as the town's physician, but as its judge as well. However, nobody in the town had any idea of his past as a racer; he was just an ordinary Hudson Hornet to them.

Upon meeting Lightning McQueen, Doc saw far too much of his past in the rookie. He was less than happy when Lightning discovers his past. After Lightning finished fixing the road he damaged and decided to stay for a while, Doc was unable to bear having him around any longer and called the news and press to immediately take him away to the Piston Cup, declaring that it is best for everyone. But seeing how disheartened everyone was by his unplanned departure, Doc realized that Lightning had become more important to them than he thought. He eventually admits the truth to everyone about his Racecar days and he took back his old #51 colors to become Lightning's pit crew chief, bringing nearly the entire town to the Piston Cup to support Lightning as his pit crew and in an ironic twist of fate, finally received that long awaited fanfare for his return.

By the end of the film, Doc opted to keep his racing colors, and became a trainer as well as a friend to Lightning. Just like Lightning, Doc learned some lessons: friendship, promises, how greed affects others, and that secrets can't be kept forever.

In Cars: The Video Game, Doc usually helped Lightning practice. His most notable lesson was when he taught him how to powerslide, also known as drifting, on dirt. In the video game, he appears at the cut-scenes for Doc's Lesson Powerslide and Doc's Challenge, where Lightning McQueen went to meet him in Willy's Butte, but he was late. Then he tested Lightning at the Willy's Butte track, and he did good. Then they had a race. After the race, Doc said that the car that Lightning notices (who was Chick Hicks) was watching the competition, and that he will meet Lightning soon. He was confirmed as Lightning's chief at the Palm Mile Speedway, when he confronted Chick for his obnoxious behavior and to stop bugging McQueen.

He didn't appear again until later on in the story, in Doc's Check-Up, when Lightning is brought in for a "check-up" around the town, a race against Doc and some of the other townsfolk, which Lightning easily wins. McQueen also told Doc that he liked the new upgrade he gave him. He later appeared at the cut-scene for Smasherville International Speedway where he told Lightning to save meeting Chick for the track. He told him that he will be fine. At Los Angeles International Speedway, he was seen driving with Lightning when he was on his way on his trip. He told him to be careful. In the final cutscene, Doc was seen driving with Lightning, Mater and Sally, to celebrate the winning of Lightning's first Piston Cup. Along with his three trophies, Doc put it on display on the outer windowsill of his clinic, for the public to see. In Cars: Radiator Springs Adventures, He appeared in the cut-scene of the Doc's Tune Up activity, which he asks McQueen to help out with his job. He also appeared as one of the characters to race against in Legends Races. Doc appears in Mater and the Ghostlight, where he scared Mater into believing in a monster called the Screamin' Banshee, which actually ended up existing.

Doc played a minor role in Cars: Mater-National Championship, as the only race he competed in is the first race in the game, where he raced against Lightning, Fred, Philip, and Barry. He also competed in Fillmore's Fuel Frenzy. He also had a minigame named after him, Doc and the Law's Race 'n' Chase.

In the third game in the series, Doc Hudson now owns his own racing academy, who races in the Race-O-Rama. In the game, he's kind of your instructor. During several races, he might say something to you sounding like it's coming from a headset. He also appears in most of the races. In Transporter 1, you had to bring something to him. In the final scene, he says to Lightning that he did a good job winning the Race-O-Rama. Due to the death of Paul Newman, Doc doesn't physically appear in Cars 2. At some point between the events of Cars: Race-O-Rama and Cars 2, Doc deceased possibly of old age, as indicated at the beginning of Cars 2. In memory, the Piston Cup was named after him, the Hudson Hornet Piston Cup; the new logo was also put on Lightning's hood in his new paint job for the World Grand Prix. He also appears on some pictures and a newspaper, the same one as seen in Cars. His clinic was turned into a museum about him, called the Hudson Hornet Racing Museum.

The circumstances of how Doc died are unknown.

John Lasseter was at first adamant that Paul Newman would return to voice Doc Hudson, even though he had announced his retirement from acting. After Newman's death, Lasseter said that they would see how the story goes with Doc Hudson. Story supervisor Nathan Stanton said: "we felt, after really tooling around with the idea of him being in the film and how do we properly use him, it just felt right that we should have his character have passed away also [as Paul Newman]." John Lasseter said that he realized "Doc Hudson was Paul Newman. The character was written after listening to him talk about his passion for racing." and that "We pay homage to Doc Hudson, which is paying homage to Paul Newman."

Despite Doc's death before the events of Cars 2, he actually appears in Cars Land in Radiator Springs Racers. After getting tires from Luigi or a paint job from Ramone, you'll meet Doc, who is your crew chief for the race. During the race, Doc will tell you through his headset some racing directions. He will say you did a good job at the end of the race.

If you listen carefully, he says different phrases for the left car and the right car:

It's possible that it was too late to remove Doc from the ride and replan it when Cars 2 came out, which can be the cause for Doc's appearance. Another possibility is that the events of that ride may have occurred after the events of the first Cars film, but before the events of the second. He is voiced by Corey Burton, or had archival records of Paul Newman.

Doc has always been grumpy, ever since he was kicked out of the racing league. Doc had been passing down his knowledge to Lightning, and it can also be noticed that he is very serious and makes sure Lightning has enough off-road practice.

Doc is painted dark blue, with a chrome grille, the same as the original Hudson Hornet.

Doc Hudson is based off of the real 1951 Hudson Hornet, which is where his name, number and paint scheme came from.

His license plate is "51HHMD", which is a reference to his year and track number (51), model (Hudson Hornet) and profession (medical doctor).

Mater: "Wow! I can't believe they renamed the Piston Cup after our very own Doc Hudson!"
Lightning McQueen﻿: "I know Doc said these things were just old cups, but to have someone else win it just didn't feel right, you know?"
Mater: "Well, Doc would've been real proud of you, that's for sure."
—Lightning McQueen shows Mater his new Hudson Hornet Piston Cup.

Brent Mustangburger: "French rally car Raoul ÇaRoule is counting on a big boost headed through there."
Darrell Cartrip: "And don't forget Lightning McQueen. His mentor, the Hudson Hornet, was one of the greatest dirt track racers of all time. In my opinion, McQueen is the best all-around racer in this competition."
—Brent Mustangburger and Darrell Cartrip mentioning Doc Hudson.

Mater: "McQueen, it's time to make your move! Get on the outside, and show 'im what Doc done taught you!"
Lightning McQueen: "10-4, Mater."
—Mater tells Lightning to take the turn by telling him to do what Doc taught him. 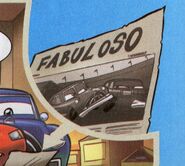 Doc in The World of Cars Online
DocHudsonCars.png 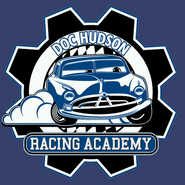 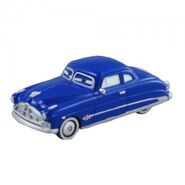 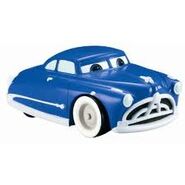 Sammy sideswipping Doc Hudson.PNG
Add a photo to this gallery
Retrieved from "https://worldofcarsdrivein.fandom.com/wiki/Doc_Hudson?oldid=51880"
Community content is available under CC-BY-SA unless otherwise noted.