Dottie is Dusty Crophopper's personal pitty and the co-owner of Chug and Dottie's Fill n' Fly.

Dottie is a forklift who co-owns and operates Chug and Dottie’s Fill ’n Fly service station. As Dusty’s practical and say-it-like-it-is friend—not to mention his ace mechanic—Dottie hopes to keep his high-flying hopes grounded in reality: Dusty isn’t built to race and chasing his dream is downright dangerous. No matter what he decides, however, Dottie will always have his back.

Although Dottie does not appear in Planes: The Video Game, Skipper Riley mentions that she has adjusted the navigation strobes on Dusty's wings to help him get to his next objective in the training mode.

According to an interview with Bobs Gannaway and Ferrell Barron on Planes: Fire & Rescue, Dottie is scheduled to appear.

Dottie is painted indigo-blue, with a brown toolbelt.

"Dusty, you are not built to race!" 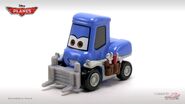 Concept art of Dottie
Add a photo to this gallery
Retrieved from "https://worldofcarsdrivein.fandom.com/wiki/Dottie?oldid=127110"
Community content is available under CC-BY-SA unless otherwise noted.