In Monster Truck Mater, his inventor Dr. Frankenwagon brings him to the Monster Truck Wrestling competition to fight Mater. Knowing he is not big enough to defeat him, Mater admits defeat, but then Lightning McQueen comes along, and distracts the monster, while Mater hangs out with Mia and Tia. Eventually, Mater grabs the monster by the hook, drives underneath the ring, and pulls at the monster, causing the ring to topple upside-down, defeating the monster.

In Cars Toons: Mater's Tall Tales: The Video Game, the monster plays the same role as in the short, only the players' characters compete in the event and try to handle the monster, while McQueen turns up at the end. 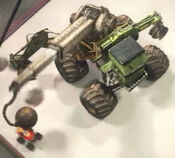