In Planes, Dusty is first seen dreaming of out-running two fighter jets. He is introduced as a crop duster that works for Leadbottom, and dreams of competing in the Wings Around the Globe rally, but is afraid of heights. After qualifying for the competition, Dusty comes in sixth place, meaning he can't be in the competition. However, the next day, Roper comes to Propwash Junction and tells Dusty and his team that the plane ahead of him was using illegal fuel, and was disqualified, so Dusty was now eligible to compete. After meeting his racing idols, most of which were mean to him for being "just a crop duster", Dusty made friends with El Chupacabra. He was told by Bulldog that it was a competition, and that every man was in it for themselves. During the first leg, Bulldog sprung an oil leak, and the wind forced the oil into his eyes, blinding him. Dusty saved Bulldog by navigating him through the castle. At the next leg of the race, Dusty fell in love with Ishani, who gave him advice to fly low, so he didn't get scared when flying high. Dusty followed Ishani's advice, only to nearly die by being hit by an oncoming train. Later in one of the legs, Ripslinger's henchman Zed broke off Dusty's antenna, and he got lost at sea, but was rescued by two fighter jets. On the way back to where he should be, Dusty was caught in a storm, and sunk, but was rescued once again by a pitty. At the hospital, Dusty was severely damaged, including having a broken wing. The next day, all of the competitors gave Dusty new parts so he could race again. While Dottie repaired him, Chug watched some of Ripslinger's races, and figured out that before every victory, Ripslinger turns to his right side so the cameras can get good photos of him. During the final leg, Dusty fought Ned and Zed, while Skipper took on Ripslinger. After Ned and Zed got stuck between each other in between two rocks, Dusty caught up to Ripslinger when he was close to the finish line, and when Ripslinger leaned to his side, and Dusty saw the chance he was looking for, and sped by Ripslinger at the last second.

When world-famous air racer Dusty Crophopper returns to hometown Propwash Junction after another victorious racing season, the former crop duster revels in his new career success until a fateful training run changes his course with a career-ending injury. Forced to shift gears, Dusty decides to train with the Aerial Fire Fighters at Piston Peak Air Attack Base as a Single Engine Air Tanker (SEAT). The heroic, often life-threatening efforts involved are admirable—but seemingly impossible to master—particularly if you’re a crop duster-turned-racer with an injury that can’t be ignored.

In Planes: Fire & Rescue, when Dusty gets news of the possibility of never being able to race again due to engine damage, he ends up finding himself joining a crew of aircraft vehicles that work to protect Piston Peak from wildfires.

Dusty is painted orange and white, with black stripes, a single propeller and two long wings.

In his turbo design, Dusty is equipped with a four-bladed Sky Slycer Mark Five propeller and two T33 wings. 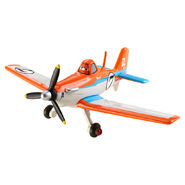 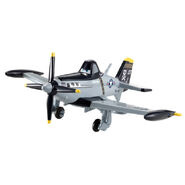 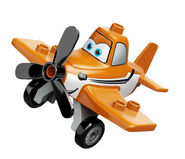 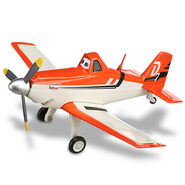 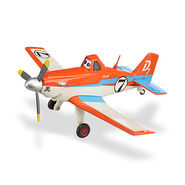 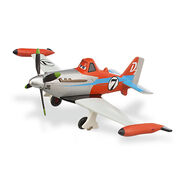 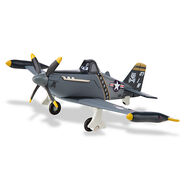 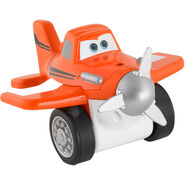 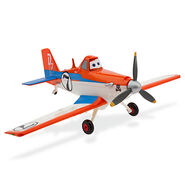 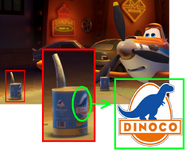 Add a photo to this gallery
Retrieved from "https://worldofcarsdrivein.fandom.com/wiki/Dusty_Crophopper?oldid=53651"
Community content is available under CC-BY-SA unless otherwise noted.