Ray Magliozzi
Dusty Rust-eze is a compact van who was a businessperson that, together with his brother, Rusty Rust-eze, established Rust-eze and developed its main product, a medicated bumper ointment.

Dusty Rust-eze is a rusted compact van that, together with his brother, Rusty Rust-eze, lived in his mother's garage in Boston, Massachusetts, United States. He and his brother loved telling jokes and helping other rusted cars. Because of that, they developed medicated bumper ointment around 1991. They started small company called Rust-eze, operating from their mother's garage, with their invention as a main product. It eventually grown into a household name with factories all over the country. Despite of company's success, they kept living in their mother's garage. Rusty and Dusty's mother stated that she was proud of her sons' successes but hoped their would eventually move out.

Around 2006, he and his brother searched for somebody to represent their product, organizing an open casting. Eventually, their worker, Mack, recommended racing driver Lightning McQueen. They signed contract with him and started Piston Cup racing team. McQueen's successes on the racing field gave company publicity and a fanbase focused around the racer and Rust-eze products. Through the racing season they would organize fan meetings with McQueen during which they would tell a joke to the spectators while awaiting Lightning's speech. After McQueen disappearance after the race at the Motor Speedway of the South they were worried and stated to the media that they did not know were he was.

Due to that, they decided to sell their company to Sterling and retire. Following that, they came to newly developed by Sterling Rust-eze Racing Center to tell Lightning about their decision. After that they went on the vacation to the tropical beach. After company was bought from Sterling by Dinoco, brothers had shown interest in returning to company.

Dusty Rust-eze is a 1967 Dodge A100 with a rusted livery of faded dark shade of green. and a lighter shade of green stripe across the middle of his body and capitalized lettering "Dodge" under his windshield. His registration plate number is EZE. He has brown eyes. 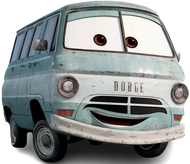 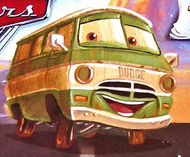 The Hospitality of Champions