Start a Wiki
watch 01:48
The Loop (Movies)
Do you like this video?
El Chupacabra is a racing competitor in the Wings Around the Globe competition.

The intensely charming El Chupacabra is a legend in Mexico (just ask him). Powered by his passion for racing (not to mention the elusive Rochelle), this caped Casanova is anything but low-key—his booming voice and charismatic presence are as big as his oversized engine. His cohorts aren’t really sure what is truth and what is delusion when it comes to El Chu, but one thing is beyond doubt: he races with a whole lot of heart and more dramatic flair than is recommended at high altitudes.

He has a character song called "Love Machine", which he sings to Rochelle to woo her.

In Planes: The Video Game, El Chupacabra is a playable character in both the handheld and the console version of the game. His four chapters are Super El Taxicabra! (taking pitties to their destinations in Germany), Ticket to Ride (racing against a freight train in Deadstick Desert), Twist of Fate (racing in Propwash Junction during a twister) and Air Force Juan (recreating a scene from a movie he starred).

El Chupacabra is painted red and white, with a single propeller, a green mask and stripe, and a green and yellow cape. His racing number is #5, which is on his tailfin.

El Chupacabra is a Gee Bee Model R, an aircraft that dates back to the early days of air racing. His wingspan is 22.3 feet (6.8 meters).

El Chupacabra is one of the most legendary names in air racing history, known for his countless victories in his home country of Mexico. 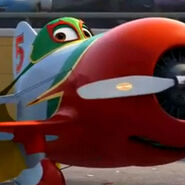 "You are not even worthy of a cape swish."

"Very well. You leave me no choice!"

Rochelle is finally in love with El Chu

El Chu with a Japanese Rochelle 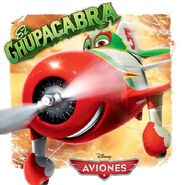 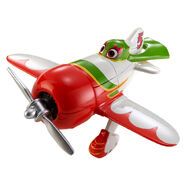 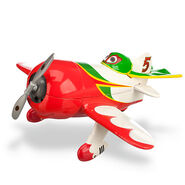 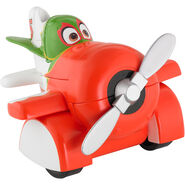 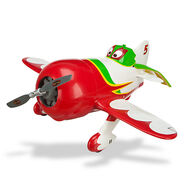 Add a photo to this gallery
Retrieved from "https://worldofcarsdrivein.fandom.com/wiki/El_Chupacabra?oldid=51031"
Community content is available under CC-BY-SA unless otherwise noted.