Eric Braker[1] is a "next-gen" race car who competes in the Piston Cup Racing Series, sponsored by SynerG. During the 2016 season, Braker is hired to replace Lane Locke, the previous SynerG racer.

Eric competes in the 2016 Piston Cup season in Cars 3. He enters the season as a mid-season replacement for previous SynerG racer, Lane Locke. He debuts at the Heartland Motor Speedway, finishing in 16th. At the Florida 500, he starts in twenty-third place and finishes in fifteenth place. 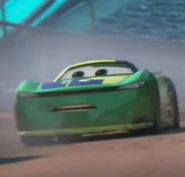 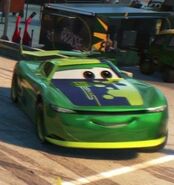 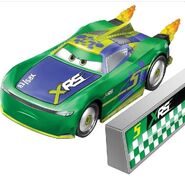 Retrieved from "https://worldofcarsdrivein.fandom.com/wiki/Eric_Braker?oldid=158750"
Community content is available under CC-BY-SA unless otherwise noted.