Ernie Gearson is a stock car that used to compete in the Piston Cup Racing Series for the Spare Mint team, with the number 93.

In Cars, Ernie competes in the Dinoco 400, the final race of the season, which takes place at the Motor Speedway of the South. He spends most of the race near the front of the pack somewhere in the top 15. Ernie took part in the accident caused by Chick Hicks that involved almost all of the racers on the track. During the accident, he initially tried to avoid it by slowing down but this caused him to drift and hit the safety wall only to soon after hit by Todd Marcus.

Ernie Gearson was T-boned at some point in the wreck as indicated by the post-wreck pit where he is driving down pit lane bent up and out of shape. He was the first racer to make it off pit road as seen in the following scene where he is side by side with Lightning McQueen restarting in 2nd. Lightning had managed to get a better run however as he already broke away from Ernie and the pack as soon as the green flag came out. Ernie had lost a lot of positions during the rest of the race as by the time of the final lap, he was near the back in front of James Cleanair as scene in a shot on the last lap. He finished some near the 30th position.

In Cars 3, Ernie is still competing in the Piston Cup. However when Jackson Storm made his debut, interest in Next-Gen race cars rose. Spare Mint took advantage of this and fired Ernie and replaced him with Nick Shift, the current racer for Spare Mint.

In Cars, Ernie Gearson is a Husker Morroco stock car. His eye color is brown. He uses Lightyear racing tires. When he started his racing career, his engine had horsepower of only 300. He is painted light blue (aqua) with a green stripe wrapped around his doors, hood, and roof. He has the Spare Mint logo on his hood, as well as the number 93 painted in white on his doors and roof. In Cars 3, Ernie had a drastic redesign looking more like a Capitol Motors Mark II or an Axxelo Fission. However, his paintjob was similar with the only difference being the headlights as he gained ones that imitate headlights with the number 93 being placed under the right one.

Ernie in the crash with Davey Apex and Haul Inngas. 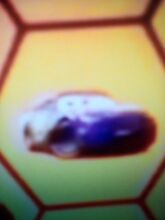