World of Cars Wiki
Register
Don't have an account?
Sign In
Advertisement
in: Characters, Cars, Cars 3,
and 9 more
English

Ernie Gearson is a professional race car, who raced for the Spare Mint team in the Piston Cup Racing Series prior to being replaced by an unknown veteran. He is a Husker Morroco, who is painted light blue, with a green stripe wrapped around his doors and hood. He has the Spare Mint logo on his hood, as well as the number 93 painted in white on his doors and roof.

In Cars, Ernie competes in the Dinoco 400 at the Motor Speedway of the South, but he runs into trouble when Chick Hicks causes an accident involving the majority of the race's competitors. During which he was hitting the safety wall before getting hit by Todd Marcus. Though Ernie receives some minor damage, he's able to continue racing.

At some point into Cars 3 he retired, and was replaced by an unknown next-gen. 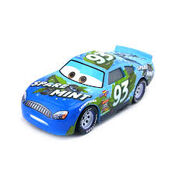