World of Cars Wiki
Register
Don't have an account?
Sign In
Advertisement
in: Trademarks, Sponsors, Cars: The Video Game Sponsors,
and 2 more
English

Fiber Fuel is a healthy fuel made from wheat that was first seen in the film Cars. It helps cars run better when incorporated to their diets. Fiber Fuel sponsors a Piston Cup team, with racers Brush Curber and McCoy. This sponsor does not return in Cars 3; however the sponsor in the Disney Pixar cars die cast line in the NASCAR series sponsoring new racer Gogo Logano, the sponsor also appears in cars 3 as a bottle in Mater's junkyard and the logo also makes a cameo in the end credits. 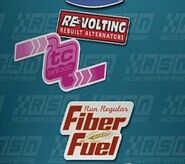 A Fiber Fuel can in the credits of Cars 3.