Finn McMissile is a British spy car who mistakes Mater for an American spy and recruits him in the mission to solve the conspiracy to sabotage the World Grand Prix.

Finn is a master British spy. Though charming and eloquent, it’s his stealth maneuvering, intelligence and years in the field that enable him to thwart unexpected attacks from bad guys, making quick daredevil escapes. Finn's design is sleek and timeless, but he is also prepared for any tricky situation with an arsenal of ultra-cool gadgets and weaponry, including front and rear grappling hooks, a missile launcher, deployable magnetic explosives and a holographic disguise emitter. As a seasoned professional in the game of international espionage, Finn believes there's a conspiracy brewing during the World Grand Prix. His clandestine work surrounding the global exhibition race puts him on a collision course with Mater, whom he mistakes for an undercover American agent with a genius disguise.

In Cars 2, Finn McMissile is first seen sneaking onto a suspicious oil platform and finds out the evil scientist Professor Z is in command of the operations there. Finn is discovered and is forced to escape without getting enough information about the professor's schemes.

Later, McMissile and his assistant, Holley Shiftwell, mistake Mater for an American spy (Rod "Torque" Redline previously slipped a device containing classified information onto his body without Mater noticing) and the group agrees to meet the next day at the first race of the World Grand Prix in Tokyo. McMissile rescues Mater from Professor Z's agents at the race and later at the Tokyo airport, and asks him to help thwart Professor Z's plan. At the race in Italy, McMissile, Shiftwell and Mater are all captured and tied up in Big Bentley, ready for the final race in London. McMissile and the others are minutes away from being crushed by the clock's giant gears, but manage to escape at the last minute.

The final race begins, and Mater learns that Z and his agents are aiming to kill Lightning McQueen next, and thus rushes to warn his friend. McMissile learns that a bomb has been fitted inside Mater's air filter and tries to warn him about the bomb just when he is about to rejoin the others. McMissile, along with the army and the police, have Professor Z arrested and order him to deactivate the bomb inside Mater. They later discover that Miles Axlerod (the former oil tycoon who sponsored the World Grand Prix to promote his new renewable fuel) was behind the scheme, and his aim was to have the world relinquish the use of all alternative fuels in favor of gasoline, allowing Axlerod to get rich from the untapped oil reserves in his possession.

At Radiator Springs, McMissile and Shiftwell pay a visit to Mater and invite him to join them on another secret mission, but he declines, saying he's home. However, Finn and Holley let Mater keep his rockets, which he uses in the Radiator Springs Grand Prix.

Later, in Cars 2: The Video Game, Finn re-appears running holograms and training with the other characters.

Finn is elegant, nice and kind. He is also daring and extremely brave, smart and eloquent, which is almost mandatory for a spy. He knows every trick in the book, and is always prepared for any kind of situation.

Finn's model is an Aston Martin DB5. He is also based on other 1960's English sports cars. However, he is said to be a 1965 Faultless GT, which is a fictional model name, and an allusion to the 1958 Peerless GT, one of his design main inspirations.

Finn is a master British spy, hired by C.H.R.O.M.E.

Finn McMissile is equipped with more gadgets than the other spies, including:

Finn is also a master of martial arts, which is of a great help in car to car combats.

Originally, Finn was supposed to appear in the first Cars movie. In a sequence that never went beyond the storyboarding stage, Lightning and Sally went to the Radiator Springs drive-in theater where a James Bond-type film about a superspy car named Finn McMissile, dispatching "Taxis of Death" was playing. The character was then more of a parody. In Cars 2, the team wanted him to be more serious, realist and understated.

Character Art Director Jay Shuster summarizes Finn's design evolution as: "We started with drawings by Joe Ranft and created an English coupe with Italian touches." Finn is a Pixar in-house design. His design draws inspiration from several sports cars from the 1960s, mainly British, but also Italian. Shuster said: “We didn’t want to design Finn as a spy. We wanted him to be a really elegantly designed English sportscar from the sixties. We did this really deep search into that kind of car from that era. We took everything from all the cars we love and baked it into Finn.” Shuster said about using Italian cars for Finn's design: “We wanted to infuse a little more Italian into that. That’s why I created a rear hip, which gave that fin a place to live.”

In the Cars storyboards, Finn had imposing tailfins. While their size was ultimately greatly reduced, it remained an essential element of his design, that influenced the choice of cars used for inspiration. "The car’s name is Finn, so he had to have fins," Cars Franchise Guardian Jay Ward said.

The only car model that Pixar has named as an inspiration for Finn is the 1958 Peerless GT, a British sports car, which was the only British sports car they found that featured tailfins. According to Ward, even though Finn draws inspiration from other cars as well, the Peerless served as the basis from which the character was built.

Finn has a large resemblance with James Bond's Aston Martin DB5 from Goldfinger. In consequence, he has been widely recognized as a 1960s Aston Martin DB5, including by Michael Caine. While Finn shares similarities with the DB5, like a near identical rear end, differences can also be seen, mainly in Finn's profile design, which is much more curvaceous than the DB5.

The animators felt it necessary to establish limitations of what Finn could do and what gadgets he had, in order to make a more earthbound character. Shuster says he found Finn to be (with Francesco Bernoulli) the hardest design to achieve, because they had to figure out where to place his spy gear. Finding how to resolve this problem had some influence on his design: Finn's side vents were modified so that machine guns could get out, and his bumperettes were made with the idea they could serve as grappling hooks. Shuster gave other details regarding how they tackled the problem: "It was decided that no, we don’t want him transforming. We don’t want body panels unnaturally unfolding or doing all that stuff… So that was the trick, designing the outer shell as though he is just a normal pedestrian car, and then we went in and found places we could have stuff unfold from."

According to Story Supervisor Nathan Stanton, the idea of having Michael Caine voicing Finn McMissile came out early in the production. John Lasseter said: “As we were developing Finn McMissile, Michael Caine always came to mind because of all those fantastic spy movies he’s done.” However, Shuster says: “For the majority of these characters I didn’t know until the very end [who was voicing them]. Honestly, they announced Michael Caine when [the character] was done and all that the animators could do to go back in and start dialing in the mouth shapes and the eye shapes.” Supervising animator Shawn Krause collected photos of Caine from his earlier spy films and based Finn's expressions on them.

"He's so good!"
—Finn likes how Mater pretends to be Ivan.

"Being killed by a clock." (chuckles) "Gives a whole new meaning to 'Your time has come.'"
—Finn commenting on his and Holley's unfortunate doom

About to throw Fred Pacer, one of Professor Z's Lemons.

Concept art of Finn with Mater

Finn talking to Mater disguised as a airport security guard 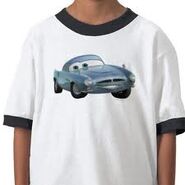 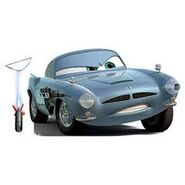 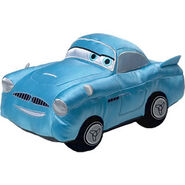 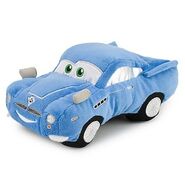 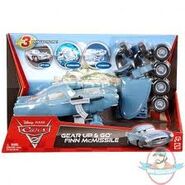 Finn looking at the water

Finn in his submarine mode

Finn about to throw Fred Pacer 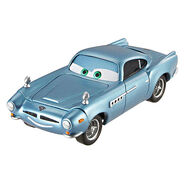 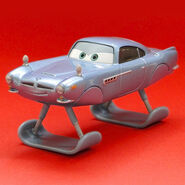 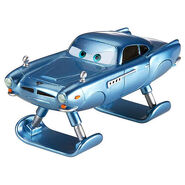 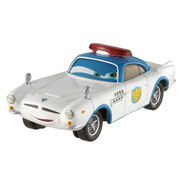 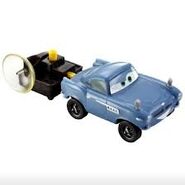 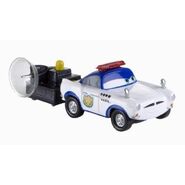 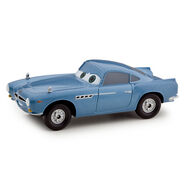 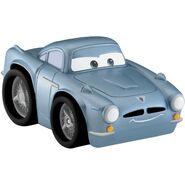 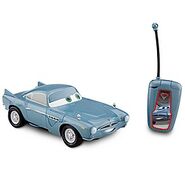 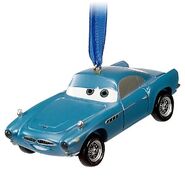 Ornament Finn (Disney Store)
Add a photo to this gallery
Retrieved from "https://worldofcarsdrivein.fandom.com/wiki/Finn_McMissile?oldid=52703"
Community content is available under CC-BY-SA unless otherwise noted.